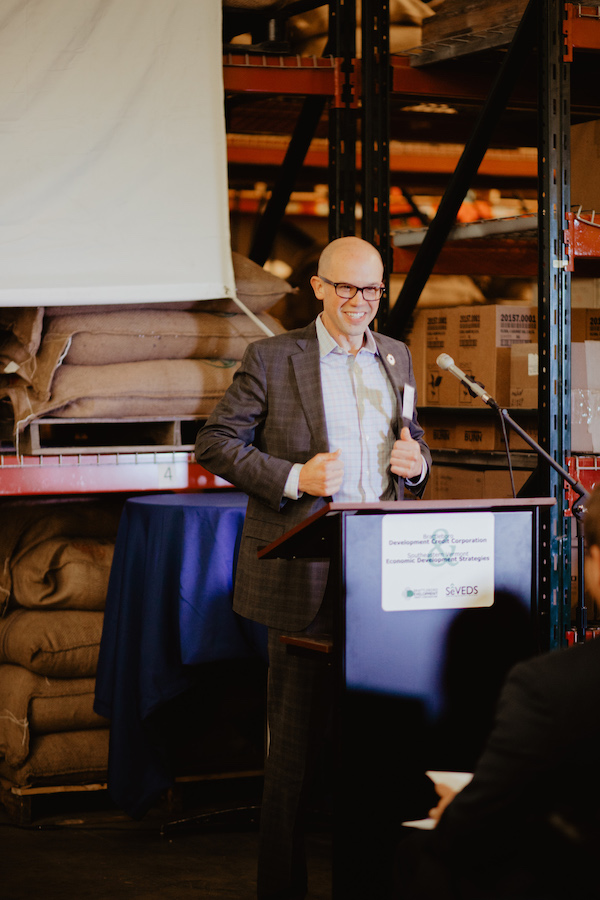 The event also served as an open house for Mocha Joe’s and three other businesses. Two are tenants of the Mocha Joe’s building which they purchased and renovated last year with help from BDCC; Hatchspace woodworking makerspace and Recycle Away recycling and waste receptacles. The third open house took place next door at Whetstone Brewery which, along with Mocha Joe’s, last year received help from Windham County Economic Development Program Vermont Yankee economic recovery funding to expand local operations.

BDCC Board President, Bob Stevens, opened the event by sharing his perspective on economic development. Stevens opened with his concerns about whether rural areas can really overcome negative market forces and trends. He then cited as evidence that we can, and do make a difference through the work of BDCC & SeVEDS the fact that 20% of Vermont’s fastest growing companies are in Windham county.

Two awards were given out during the evening program. Sheldon Scott, Owner of Whitney Blake Incorporated, received the BDCC Founders Award from Chris Hackett of Westminster. When WB started it was the first tenant in the Bellows Falls Industrial Park. Scott is a second generation owner of the company which has grown 400% under his leadership. He expressed his pride in their long history in the region, and said that it felt especially good to be recognized for contributions to the economy as the company is poised to bring new jobs to the region in the coming year.

Avery Schwenk, Chair of SeVEDS, explained that the SeVEDS Leadership Award for Excellence in Economic Development Leadership celebrates local leaders and volunteers helping to grow our economy. This year’s award was presented by Jeff Nugent of the Windham Regional Commission. The award went to two key leaders from Readsboro. Omar Smith was recognized for his contributions and patient commitment to the Readsboro Broadband Committee. Susan Bailey of Readsboro Downtown Development was celebrated for her many years of tireless work, with special mention of two major projects that have brought new activity to the town: the Catamount Trailhead Parking and renovations of the historic Bullock building.

Keynote Speaker Rich Grogan, new Executive Director of the Northern Borders Regional Commission, outlined his priorities for that organization, which are based on his work with small businesses and communities in Vermont and New Hampshire. Grogan emphasized the importance of layering and leveraging federal investment, as BDCC & SeVEDS have been doing so effectively to increase resources flowing into southern Vermont for economic and community development.

The FY19 Annual report was shared with meeting attendees. The report provides an overview of program and project activity, and touches on some of the stories behind BDCC & SeVEDS regional impact of over $29 Million last year. It highlights a broad range of partners and beneficiaries, from the 605 high school students who took part in Pipelines and Pathways Program (P3) last year, to the 58 companies large and small who received direct assistance in FY’19. The Annual Meeting program also included a video showing “A Day in the Life” of BDCC & SeVEDS. The video provided a snapshot of what staff do each day in the office, at the Cotton Mill or Business Park, and around the region with employers, educational partners, and communities. The video and annual report can both  be viewed at www.brattleborodevelopment.com.

Cleanup of Industrial Site in Brattleboro Part of Deal to Save 100 Jobs BRATTLEBORO, VT…