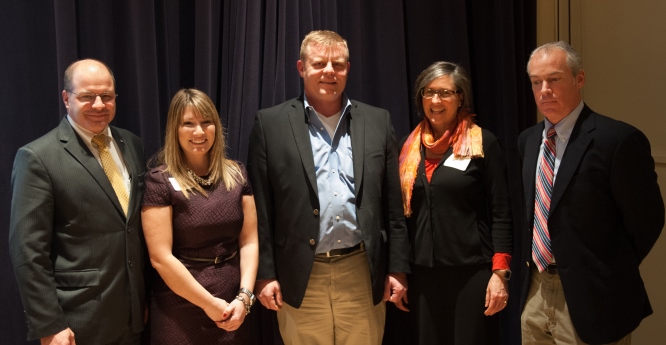 This award is presented annually in recognition of sustained and effective efforts to mobilize leadership in the development of programs and projects, planning and designing of new and creative economic development activities and deep commitment as a leader and advocate for economic development in Southern Vermont.

Every year SeVEDS looks specifically for an individual or organization who has demonstrated consistent, exemplary performance in the economic development of our region, leading the execution of projects that have significant impact on revitalizing communities, and playing a major role in generating long-term growth and prosperity, improving the regions quality of life and sustaining its quality of place.

Brattleboro Development Credit Corporation (BDCC) Director of Workforce Development Pat Moulton Powden coordinates SeVEDS workforce development activities in partnership with employers and education and training providers. She says that the significant investment G.S. Precision has made in the future of its company’s workforce training programs is in an excellent example of the work and investments needed to improve southeastern Vermont’s economy.

“The creation of the GS Precision School of Manufacturing Technology is an investment in the people of GS Precision enabling employees to learn critical skills, earn more and enhance the competitiveness of the company.” commented Patricia Moulton Powden of BDCC. “We are pleased to be able to recognize GS for their leadership in workforce development.”

In March of 2013, G.S. Precision reached an agreement with Vermont Technical College to form a partnership in which GSP would provide classroom and laboratory facilities, while VTC would provide formal and accredited instruction in subjects relevant to Manufacturing and Process Engineering.  The result was the formation of the GSP School of Manufacturing Technology. Students who are accepted into the 2 year program earn credits towards an Associate’s degree, while concurrently, they learn from “hands-on” experience while working through a structured job rotation at GSP.  Classes started in this past September.  Partnering with Vermont Technical College, G.S. Precision is providing its students with an opportunity to receive training and education that will help further their careers.

“While training has always been an important part of our business, historically it has been “on-the-job” training.  The company’s growth and evolution towards products with significantly higher degrees of complexity has created a need to increase our technical staff.   Despite fairly aggressive recruiting and internal training efforts, we have not been able to meet that need, and as a result, our growth has been tempered.   Our decision to partner with VTC and to make the necessary investments to start and operate the GSP School was made with the intentions of adding depth to our technical team, specifically in the areas of Manufacturing and Process Engineering, and being able to support our customers’ growing demand projections in the years ahead.”

About G.S. Precision: “Founded in 1958, G.S. Precision, Inc. is a global leader in the manufacture of precision components and assemblies for customers that produce Aircraft and Land-based Turbine Engines, Commercial and Military Aircraft, Missile Guidance systems, Infra-red Optical systems and other “mission critical” devices.   With headquarters in Brattleboro, Vermont and additional operations in California and Mexico, the company has 420 employees serving a world-wide customer base.   The company is ISO9001:2008 and AS9100-C certified and holds many NADCAP and customer specific special process certifications.”

About SeVEDS: SeVEDS is an affiliate of BDCC that grew from a 2008 grass roots effort, initiated by BDCC, to reverse the economic decline of the Windham Region.  For more information on SeVEDS visit www.seveds.com