The 2021 Southern Vermont Economy Summit offered a terrific lineup of thought-provoking speakers, webinars, panels, and interactive sessions. During the session “Reframing Growth, Vetting our Values” we thought it would be interesting to do an experiment. Can we explore and expand our perspectives on how Vermont Values relate to the economy in just an hour and a half?

A lively group of participants were up for the experience.  At the start of the session they responded to three questions:

These questions were asked again at the end of the session, to see how the conversation shaped people’s thinking…or not!

In between the first round and second round of questions, Jonathan Cooper from BCIC/BCRC presented on the Vermont economy- we encourage you to watch the recording of this presentation here. Cooper’s data showing the amount of money that businesses bring into the Vermont economy was an eye-opener for everyone in the session, and a great tee-up for the business panelists who provided some of their own perspective on the markets they serve. Q&A panelists included Virginia Vogel of Backroads Granola, Michael Alexander of Recycle Away, Elizabeth Buckley of Vishay Intertechnology, and Elise Di Feo of Two One Ceramics. These local companies all serve outside markets like national grocery chains, municipalities across the country, high-end housewares outlets in urban markets, and the high-tech manufacturing industry.

To see the full session and presentations, as well as the other sessions, visit our Southern Vermont Economy Summit Materials and Recordings page.

After the presentation and panel, small breakout  groups talked about what people learned during this session. When people came back from the breakout sessions, we asked them the three questions again.

After the presentation and Q&A, the percentage of people who believed economic growth was good (Yes) went down by 4 percentage points. This shows there was an increased understanding that economic growth is actually more complicated than just good or bad.

The second question was: What are the biggest challenges for businesses in Vermont? The answers to this question are displayed in a word cloud format with answers entered the most shown in the larger font. The first word cloud is from the start of the session, the second from responses post-panel and discussion. 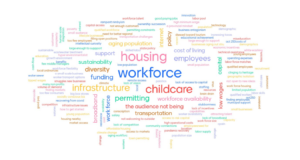 The first thing that stands out is that overall, between round 1 and round 2, people agreed that workforce, or lack thereof, was the biggest challenge to Vermont.

The word clouds are so interesting because they aggregate challenges people are thinking of, but also show consensus in some areas. The differences between round 1 and round 2 are seen in the second largest words. In round 1 we see infrastructure and permitting showing up as those larger themes after workforce, housing and childcare. In round 2 we see retention and wages show up after workforce, and benefits show up with housing and childcare.

This tells us from round 1 to round 2 we went from policy and physical structures being centered, to more consensus around employee well-being as a main challenge.

The third question and, in our opinion, the hardest to answer was: How does our economy reflect our values as Vermonters?

In the first round the main themes we saw, which might not surprise you, were small and local, highly entrepreneurial, cautious or slow to change, and focused on the environment, both through sustainability and tourism.

There were a few people who stated that our economy does not reflect our values, for example: “We believe in hard work and self-sufficiency… but [jobs] do not provide a wage equal to… living expenses” or “the disconnects are more numerous than the connects,” also there seems to be a “lack of appropriate support for intelligent business growth and investment.”

During the second round, with fewer people, it was harder to find key themes.

Some ideas stayed the same between the first round and second round. Such as the idea that our values and our economy are reflected in our small and local economy that is also highly entrepreneurial.

While most did not put these two ideas in the same sentence, these two go hand-in-hand. Without a highly entrepreneurial community it is almost impossible to have a small and local business economy.

Some new themes came up in the second round. The idea of “quality over quantity” in our economy gained a lot of traction. This came up from the business panelists as something at the core of their success – that their customers rely upon the quality of their products and services. Sometimes this is overtly tied to their being “Vermont made” and sometimes it’s not, but the quality distinction was important for all of them in terms of competing in the national or even global marketplace.

There was also a push to focus on how to best “invest in our children” and “support our families” with the assumption that these values are not currently being reflected in our economy.

The group that participated in this experiment were people who self-selected to attend a summit titled “Southern Vermont Economy Summit” and then attended the session titled “Reframing Growth, Vetting our Values.” Survey responses tell us that most felt they learned something new.

To see the answers of the first and second round go to the materials and resources page on the Southern Vermont Economy Summit website.

Did people really change their minds? We had an amazing set of conversations about what the economy means to us, who is a part of it, and spent some time reflecting on how our values shape our economy.

Sharon Cunningham is the Executive Director of the Deerfield Valley Chamber of Commerce. We asked…