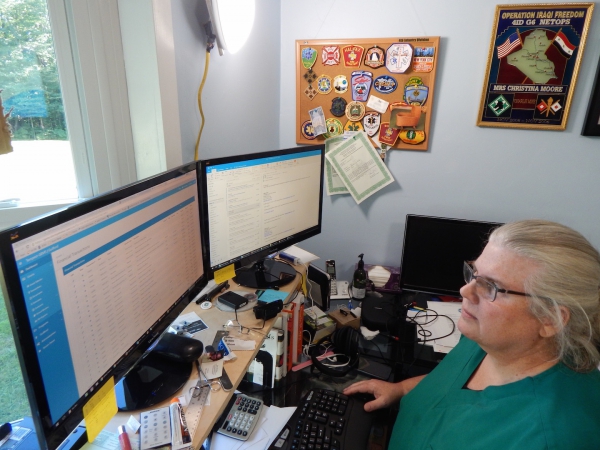 But there are two common threads — technological expertise and emergency response — that run through the Halifax resident’s life and career.

The devastating floods of Tropical Storm Irene in 2011 led Moore to form Storm Petrel LLC, which has woven those two threads into a new software package designed to ensure small governments are prepared for disaster and can navigate its expensive, often-confusing aftermath.

“When an organization — a county, a municipality, whatever — makes a mistake in [disaster] procurement, it’s the local taxpayer who pays,” Moore said.

Moore has a longtime affinity for new technology. Growing up near Boston, she had her first computer-programming class in eighth-grade and discovered she had an aptitude for it.

At college in Wisconsin in the early 1980s, Moore says she was one of only a handful of students on campus with a personal, desktop computer — a fresh development at the time. But she graduated with a degree in biology, figuring that computer science had too much to do with the big mainframe computers of the pre-PC era.

Moore spent some time after college working on ambulances in Boston. Eventually, she made her way to Alaska, where she spent a decade and found herself working with technology again.

“I had a number of jobs, and they were all very closely related,” Moore recalled. “I worked for FedEx … I was part of the software-development team that tried to find bad guys. We tried to find contraband freight. So we worked closely with U.S. Customs.”

Another job in Alaska involved deployment of a telemedicine system for the U.S. Public Health Service. Moore also worked for Cisco Systems, doing information-technology work for the U.S. military.

That led to a one-year assignment as a civilian supporting Army operations in Iraq, where she worked on fiber optic and microwave systems.

Moore had moved to Vermont in 2005, shortly before heading to Iraq. But when she returned from overseas, she had trouble getting her life started again: She says many potential employers were quietly wary of hiring someone fresh from a war zone.

“I came back to closed doors and closed opportunities and lots of people saying, ‘We support our troops, we support what we’re doing over there,’ but the support wasn’t a job,” Moore said.

In 2008, Moore founded the nonprofit rescue organization Halifax EMS, and she remains the organization’s chief. But professionally, she says, “nothing really popped in a significant way between coming back from Iraq and Tropical Storm Irene.”

“When we got done with our assessments, the town of Halifax had $4.5 million worth of damage,” Moore said. “We’d lost four bridges and miles of roads. The town of Halifax’s annual operating budget at that point was about $800,000.”

Moore was part of the town’s emergency operations center. But she also shifted into an organizational, financial role soon after the storm, drawing on her experience with federal regulatory compliance as Halifax sought disaster-recovery help from the Federal Emergency Management Agency.

“When we got hit, we knew that we had to keep track of every single piece of paper and every expense and every decision that we made,” Moore said.

“We were tracking our cash flow,” she recalled. “We were able to better project our cash needs. We were able to get loans from banks because of the analysis I was able to do.”

A little over a year later, Moore took her expertise to New York City to assist with Hurricane Sandy recovery. But she found a familiar problem there: There was no efficient way to work with the “massive” documents and dollar amounts associated with federal disaster-recovery funds.

So Moore, upon returning to Vermont, set about creating those tools. She had founded Storm Petrel as a consulting firm, but she shifted toward creating software designed to assist disaster-stricken communities in dealing with a maze of federal funding regulations.

“We then used that tool to do grant management in Guilford,” Moore said. “We closed out their [Irene] work on our new software.”

“The amount of time and taxpayer money it would have taken for me to learn it all would have ultimately been cost-prohibitive for the town,” Buckley said, adding that Moore’s company “took all of my records and transformed them into the exact format FEMA needed from us.”

Moore describes her software, Tempest-GEMS, as a grant-expense management system. While simplifying financial tracking, it also can prevent errors such as failure to follow federal procurement regulations or failure to provide enough supporting documents.

After studying federal reports showing common mistakes made by local governments in the aftermath of a disaster declaration, Moore’s company has branched out by providing reviews of town or county policies before emergencies arise.

“We’ve developed tools that score people’s procurement policy — how good is your policy compared to the federal standard,” she said.

“And then, the other thing that we do is, every single time an organization executes on a new [disaster-recovery] contract, we score their compliance for that contract,” Moore added. “The idea is that we’re making them bulletproof against FEMA. Or, if they’re not, pointing to areas where they could make those improvements.”

Moore sees further opportunities for expansion as the federal government has begun standardizing its grant and procurement rules across multiple agencies. In other words, Storm Petrel isn’t limited to storms anymore.

“Our tool now is in a position where it can accommodate managing pretty much any federal grant,” Moore said.

Storm Petrel is still young, but the company is growing. From her home base in Halifax, Moore says she brought on a programmer late last year and added a vice president of business development earlier this year.

Storm Petrel also has caught the attention of others in the Windham County business community.

Laura Sibilia, director of economic and workforce development at Brattleboro Development Credit Corp., was familiar with Moore’s emergency management work after Irene. Moore came back on the Development Corp.’s radar when she submitted her software business for consideration in the region’s Comprehensive Economic Development Strategy.

Recently, Sibilia says, a “light went on” — why not connect Moore’s work with Development Corp.’s efforts to identify and nurture “green building” expertise and related services in the area?

“We think there could be some pretty exciting collaborations set off by connecting those various entrepreneurial dots,” Sibilia said.

While there may not be an obvious connection between Storm Petrel and green building, Moore says it isn’t a long reach given some of the movement’s key themes: sustainability, climate change, and resilience.

Local governments can receive grants to mitigate natural disaster hazards, and they get disaster-recovery funds when the need arises. “We make it easier for them to get the money and hold onto the money and provide the justification that they spent the money well,” Moore said. “And that is a definition of resilience.”

A conversation with Lisa Sullivan, owner of Bartleby’s Books

“The GSP project helped us retain 300 high paying, quality precision manufacturing jobs and will create up to 100 new positions here”
BDCC is a private, nonprofit economic development organization dedicated to creating and retaining a flourishing business community that supports vibrant fiscal activity and improves the quality of life of all its residents
Join our Mailing List
Copyright BDCC - All Rights Reserved. The work of Brattleboro Development Credit Corporation is made possible in part by a grant from the State of Vermont through the Agency of Commerce and Community Development.