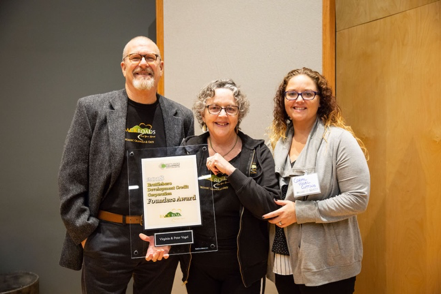 Montpelier, VT – On December 16th Governor Phil Scott honored recipients of this year’s Vermont Building Communities Grants for Regional Economic Development. Family-owned Back Roads Food Co. LLC received an award of $15,000 to help them finalize a major investment in their Brattleboro production facility. With new processing equipment, Back Roads will be able to fulfill growing demand for the organic, non-GMO, gluten free and kosher granola and oats. 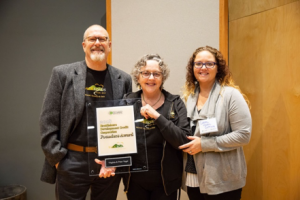 Back Roads is a shining example of Vermont’s Farm-to-Table economy, and of the region’s outstanding entrepreneurs. In 2003 Peter and Virginia Vogel founded Vermont Gold. They were pioneers in featuring Vermont maple syrup in glass bottles, and pioneered using maple syrup as a major ingredient in food products. When the Vogels sold their company to Bascoms, they took up Llama breeding and launched another business – the Spirit Hill Farm B&B. Guests fell in love with the home made maple- sweetened granola being served at the B&B. They wanted to be able to buy more to take home. Based on that demand, the Vogels started producing in bulk and sold to the Brattleboro food coop.

Eventually, the Vogels moved back into the same space at the Brattleboro Development Credit Corporation’s Cotton Mill where they had started Vermont Gold. With the new investment in production, Back Roads is on track to produce 4,000 pounds of granola per day with 21 local employees. By improving production scale the firm can improve profitability and acquire larger accounts, including nationwide grocery chains. Back Roads is an important part of southeastern Vermont’s growing food and beverage production sector which is responsible for 16% of Windham County’s job growth since 2006.

Adam Grinold of BDCC accepted the award from Governor Scott on behalf of the Vogels.

Peter and Virginia are especially proud of their team, and having a fun work environment where everyone feels happy and appreciated, and free to be themselves. That team culture is “baked in” to the Back Roads company. They have adopted practices like Babies at Work to supports families providing flexibility in the workplace, expanded Paid Time Off, a Wellness Allowance and competitive wages. They support organic farmers who produce ingredients grown in a manner that is healthy and sustainable for the environment and safe for the people who grow them.

Southeastern Vermont Economic Development Strategies (SeVEDS) is an affiliate of BDCC that grew from a 2008 grassroots effort, initiated by BDCC, to understand and create long term strategies needed to reverse the economic decline of the Windham Region and plan for the economic impacts from the closure of the Vermont Yankee nuclear power plant. In 2014, after multiple years of regional input, education and data gathering, SeVEDS received federal approval for the Windham Region’s federally recognized S.M.A.R.T. Comprehensive Economic Development Strategy (CEDS). SeVEDS partnered with Bennington’s Regional Economic Development Group in 2018 to develop the 2019 Southern Vermont Zone CEDS. For more information visit: www.seveds.com.

BDCC’s Rural Microentrepreneur Assistance Program is a USDA program that provides a $400,000 loan to the…