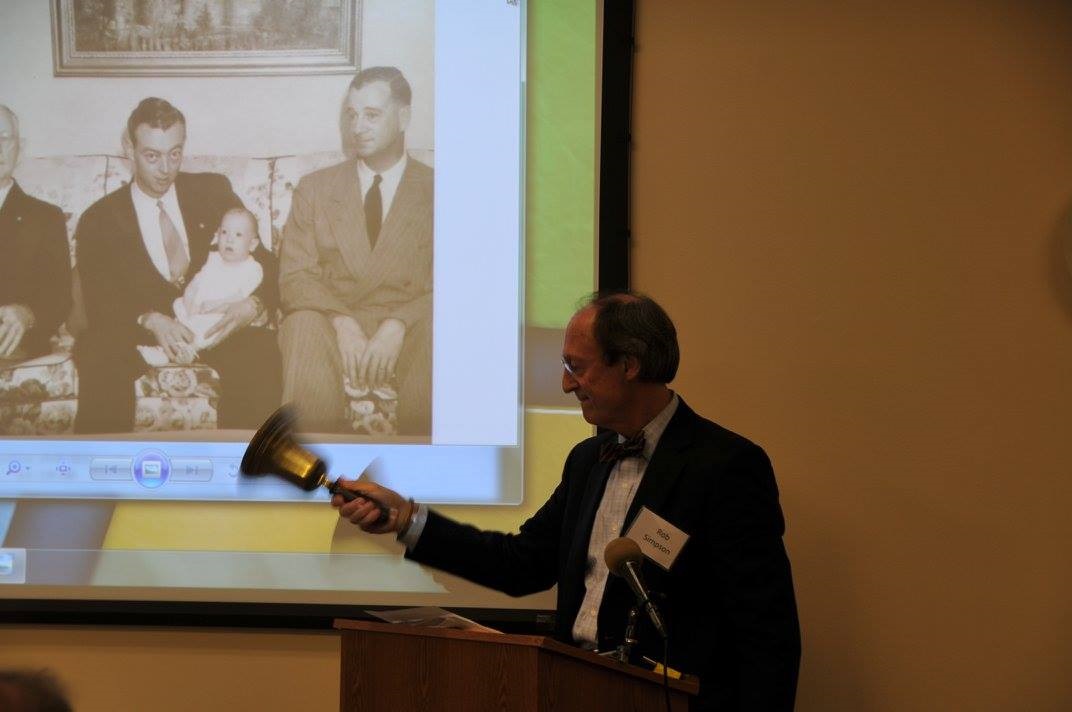 The theme for the joint meeting was a focus on the regional workforce.  Dr. Peter Eden of Landmark College of Vermont spoke at length about the college’s new S.T.E.M. center, his passion for internships and the opportunity for employers to hire people who learn a little differently.  Noting that Landmark doesn’t “hand hold” it’s students, but rather provides support for developing achievement strategies, Eden outlined plans the college has for adding to its Bachelor’s degree and athletic programs.  Noonan offered comments on the myriad workforce development programs available through the Vermont Department of Labor and noted the department’s efforts support for BDCC’s Internship program.

BDCC announced Ehrmann Commonwealth Dairy, LLC as the recipients of the 2015 Founder’s Award.  Miskovitch presented the award to Thomas Moffitt, President and CEO and explained that the winner of the annual Founders award is an individual that makes things happen in the community, is known for creating value added jobs and for promoting a climate that enhances the economic vitality of the region.  Their efforts and actions make a difference to the area and to the business climate.  Ehrmann AG (www.ehrmann.de) is a family-run international yogurt company based in Germany. The Company has manufacturing facilities in Germany, Russia, and the Czech Republic with branded and private label sales in over 40 countries. Ehrmann AG employs over 1,600 people worldwide, has annual revenues in excess of $1 billion, and is known for their technological innovation and excellent product quality.

SeVEDS announced Dr. Rob Simpson of the Brattleboro Retreat was the recipient of the 2015 SoVermont Leadership Award for Excellence in Economic Development. SeVEDS Board member Drew Richard’s presented the award to Simpson.  Under his leadership, the Brattleboro Retreat has been able to offer innovative programming to address specific client population needs, such as the Uniformed Service Program and the Adult Inpatient LGBT Program.  The Retreat has increased its number of inpatient staffed beds from an average of 50 to 122. During the same period, the Retreat has more than doubled its number of employees, increasing from 425 to 870 in career paths offering highly competitive wages. Numerous significant facility upgrades and maintenance projects at the Retreat requiring an investment of approximately $21 million were spearheaded by Dr. Simpson. Modern Healthcare magazine has ranked the Brattleboro Retreat as number 13 on its 2015 list of the 15 largest behavioral health providers in the United States. Additionally, the Retreat has successfully implemented a Systems Improvement Agreement with the Center for Medicare & Medicaid Services that is building on and strengthening the many quality of care systems changes that the organization has made during the major growth of the last eight years.  Richard’s explained that the annual award is presented in recognition of sustained and effective efforts to mobilize leadership in the development of programs and projects, planning and designing of new and creative economic development activities and deep commitment as a leader and advocate for economic development in Southern Vermont.

BDCC (Brattleboro Development Credit Corporation) is a private, nonprofit regional economic development organization serving as a catalyst for industrial and commercial growth throughout Southeastern Vermont, including Windham County and the towns of Readsboro, Somerset, Searsburg, and Weston. BDCC’s primary objective is to create and retain a flourishing business community that supports vibrant fiscal activity, and improves the quality of life of all its residents.  BDCC is affiliated with the State of Vermont as the certified Regional Development Corporation (RDC) serving the greater Windham County area.  BDCC is one of 12 RDCs throughout Vermont.  BDCC provides some funding and contract staffing for SeVEDS. More information can be found at www.brattleborodevelopment.com

SeVEDS (Southeastern Vermont Economic Development Strategies) is an affiliate of BDCC that grew from a 2008 grass roots effort, initiated by BDCC, to reverse the economic decline of the Windham Region.  It is guided by a regional board of 18 public and private sector individuals and staffed by BDCC. SeVEDS has solicited and received broad municipal and private sector support within the region, and completed the region’s first ever Comprehensive Economic Development Strategy (CEDS) in 2013. More information can be found at www.seveds.com