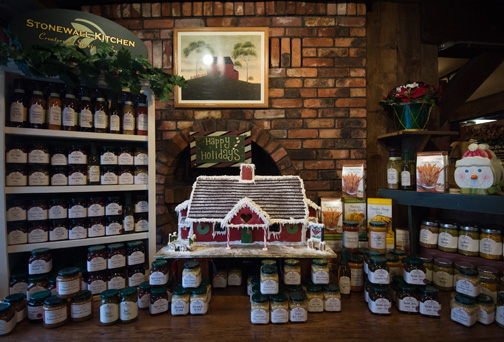 Pictured above a gingerbread rendition of the Vermont Country Deli flagship store.  Owner William Daley shared his strategy as a business buyer –  find a good business to build into a great (and delicious!) business.

Brattleboro, VT. People aged 60 and over own nearly a third of private businesses in southeastern Vermont. Many lack a succession plan. Concerned about the loss of businesses and jobs the Brattleboro Development Credit Corporation is focusing on “succession planning.” With a grant from USDA Rural Business Development, BDCC launched a new program this fall called REGENER8 to support business owners seeking an exit, and the business buyers for whom that represents an exciting opportunity. On January 14th BDCC will hold an information session for potential business buyers.

This will be a follow-up to an event BDCC recently held for sellers, with the help of Don Jamison from the Vermont Employee Ownership Center, Tammy Richards from Country Business (the region’s top business brokers), and Attorney David Dunn. The recent event covered the role of brokers and other technical assistance providers such as lawyers and accountants. Multiple scenarios were outlined, from transition to family members or to employees, as well as purchase by an outside individual or entity. The event featured William Daley, owner of Vermont Country Deli, who provided an inside, up-close view of the business sale process.

Vermont is known for high levels of entrepreneurship. But with an aging population, many small business owners are nearing retirement. It’s estimated that over 500 businesses and 5,000 jobs in the Windham region will be affected in the coming decade. Businesses owned by boomer entrepreneurs tend to be larger, and have more employees. This means a large share of the economy is at risk if succession is not successful.

Preparation for ownership transition takes time and, in many cases, expert assistance. Often, entrepreneurs find themselves desiring a quick exit, especially if events such as illness or COVID-19 create hardship. But if a business isn’t ready for sale, or a buyer not identified and ready, succession can fail and result in stalled retirement plans or even business closure. “We became focused on this issue a few years ago because of the risk, but also because of the tremendous opportunity business ownership offers to individuals. Small companies play a huge role in our economy. What’s really special about this program is it’s the first time we’ve set out to support both sides of the deal,” explained R.T. Brown, who runs REGENER8.

REGENER8 seeks to raise awareness about the need for exit planning, and the resources available to help both buyer and seller. Potential business buyers are invited to attend the training event on January 14th (1:00 pm to 3:00 pm) via Zoom. You can register here, call or email to sign up.

A conversation with Wilbur Rice, the owner of Equipe Sport

Artistry, energy and a passion for excellence took him from southern California to southern Vermont…