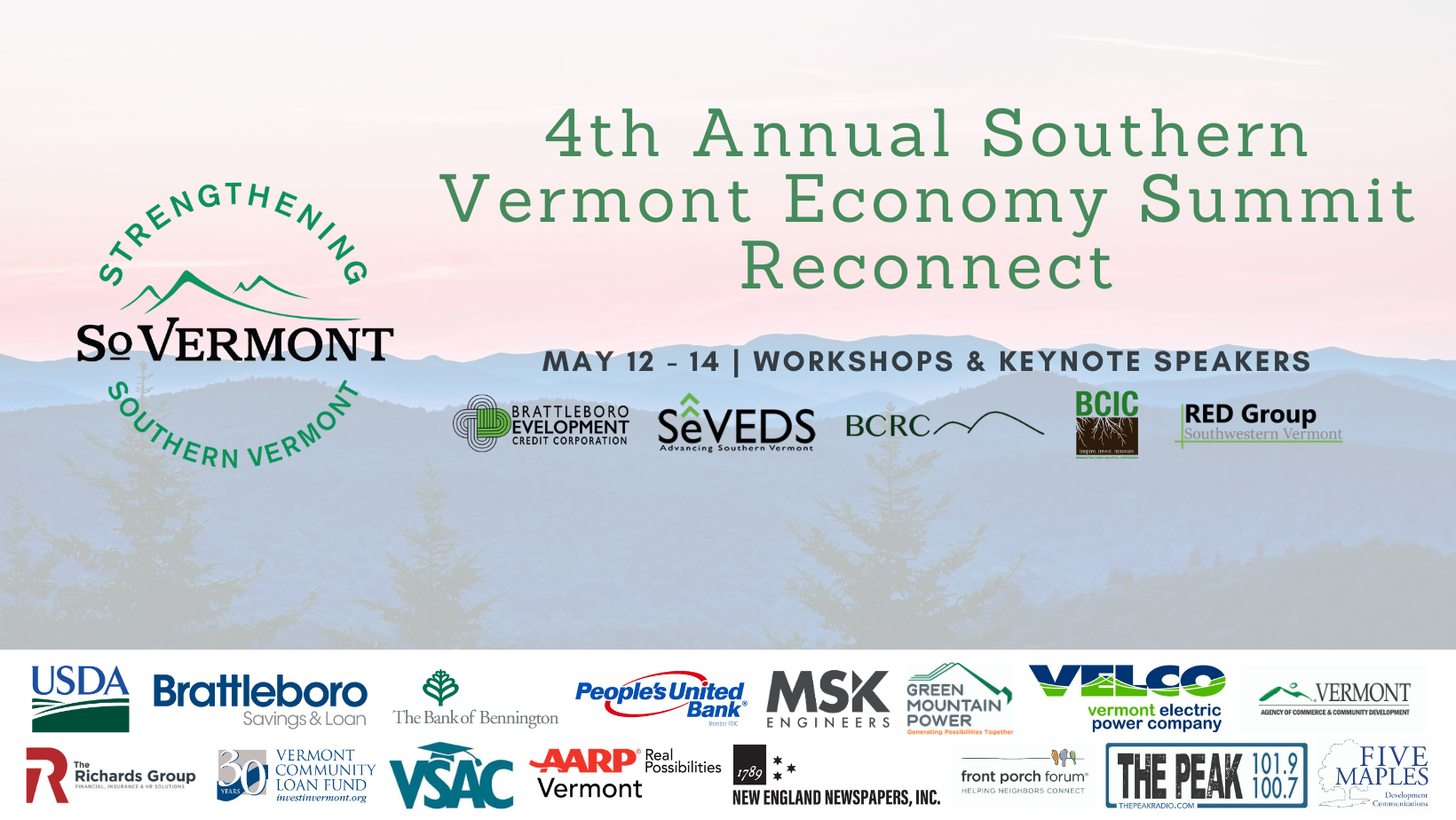 Southern Vermont- Registration is now open for the Fourth Annual Southern Vermont Economy Summit at www.sovermontzone.com/summit . This three-day virtual event will be held May 12th, 13th, and 14th.

The 2021 summit theme is “Reconnect”. It’s a chance to reconnect with one another, and with new ideas. The summit features workshops, networking, panel sessions, and special speakers focused on small business development, reimagining wealth-building for our communities, small scale changes to strengthen communities, and a 3-part New-to-Vermont lunch series. The Summit is anchored by “In Conversation With: Governor Scott and Lt. Governor Gray on Envisioning Vermont’s Future” followed by “The Future Talks Back,” a young professional town hall discussion on the future of our regional economy.

The 2021 Summit will feature two outstanding keynote speakers. We open with Tony Pipa, Senior Fellow of Global Economy and Development at the Center for Sustainable Development at the Brookings Institution. Pipa will discuss the new administration’s approach to federal rural programs and funding, and what this means for our region. Pipa was the Obama administration’s chief strategy officer at the U.S. Agency for International Development, Directed the NGO Leaders Forum at Harvard University, and helped launch Foundation for Louisiana in the aftermath of Hurricane Katrina. Pipa’s recent report “Reimagining rural policy: Organizing federal assistance to maximize rural prosperity” highlights shortcomings and shortfalls in America’s rural policy.

Majora Carter, a real estate developer, urban revitalization strategy consultant, MacArthur Fellow and Peabody Award winning broadcaster, will close out the Summit on Friday. Carter applies her corporate consulting practice focused on talent-retention to reducing Brain Drain in American low-status communities.  She has firsthand experience pioneering sustainable economic development in one of America’s most storied low-status communities: the South Bronx. She and her teams develop vision, strategies and the type of development that transforms low-status communities into thriving mixed-use local economies. Her approach harnesses capital flows resulting from American re-urbanization to help increase wealth building opportunities across demographics left out of all historic financial tide changes. Carter is quoted on the walls of the Smithsonian Museum of African-American History and Culture in Washington D.C.; “Nobody should have to move out of their neighborhood to live in a better one”.

Summit Sponsors are The Bank of Bennington and Brattleboro Savings and Loan. The Economic Keynote sponsors are People’s United Bank and Vermont Agency of Commerce and Community Development. Community Keynote sponsor is MSK Engineering. Lunch Session sponsors are VELCO and Green Mountain Power. Base level sponsors are The Richards Group, Vermont Community Loan Fund, AARP VT, and VSAC. The Brattleboro Development Credit Corporation, Bennington County Regional Commission, and Bennington County Industrial Corporation organize the Summit on behalf of the Southern Vermont Economic Development Zone. The Summit is part of the Southern Vermont Economy Project which helps build capacity, expertise and resources in the Zone with support from the USDA Rural Community Development Initiative.

About the Southern Vermont Economy Summit

About the Southern Vermont Economy Project

About the Brattleboro Development Credit Corporation

The Brattleboro Development Credit Corporation is a private, nonprofit economic development organization that serves as a catalyst for industrial and commercial growth throughout Southeastern Vermont, including Windham County and the towns of Readsboro, Searsburg, Winhall and Weston. BDCC serves as the State of Vermont’s certified Regional Development Corporation (RDC) for the greater Windham County area. BDCC is one of 12 RDCs throughout Vermont. BDCC activities are made possible in part by a grant from the State of Vermont through the Agency of Commerce and Community Development. For more information visit: https://brattleborodevelopment.com/

About the Bennington County Industrial Corporation

About the Bennington County Regional Commission

The Southern Vermont Economic Development Zone was established by an act of the 2015 Vermont Legislature. The Zone convened a Committee which called on Bennington County and Windham County to develop  a region-wide CEDS. For more information please visit: https://brattleborodevelopment.com/update-southern-vermont-economic-development-zone/

Southern Vermont Economy Summit Returns! Save the Date for the Virtual SoVT Summit May 12th-14th, 2021

The Fourth Annual Southern Vermont Economy Summit will be held virtually May 12th-14th, 2021. Like…