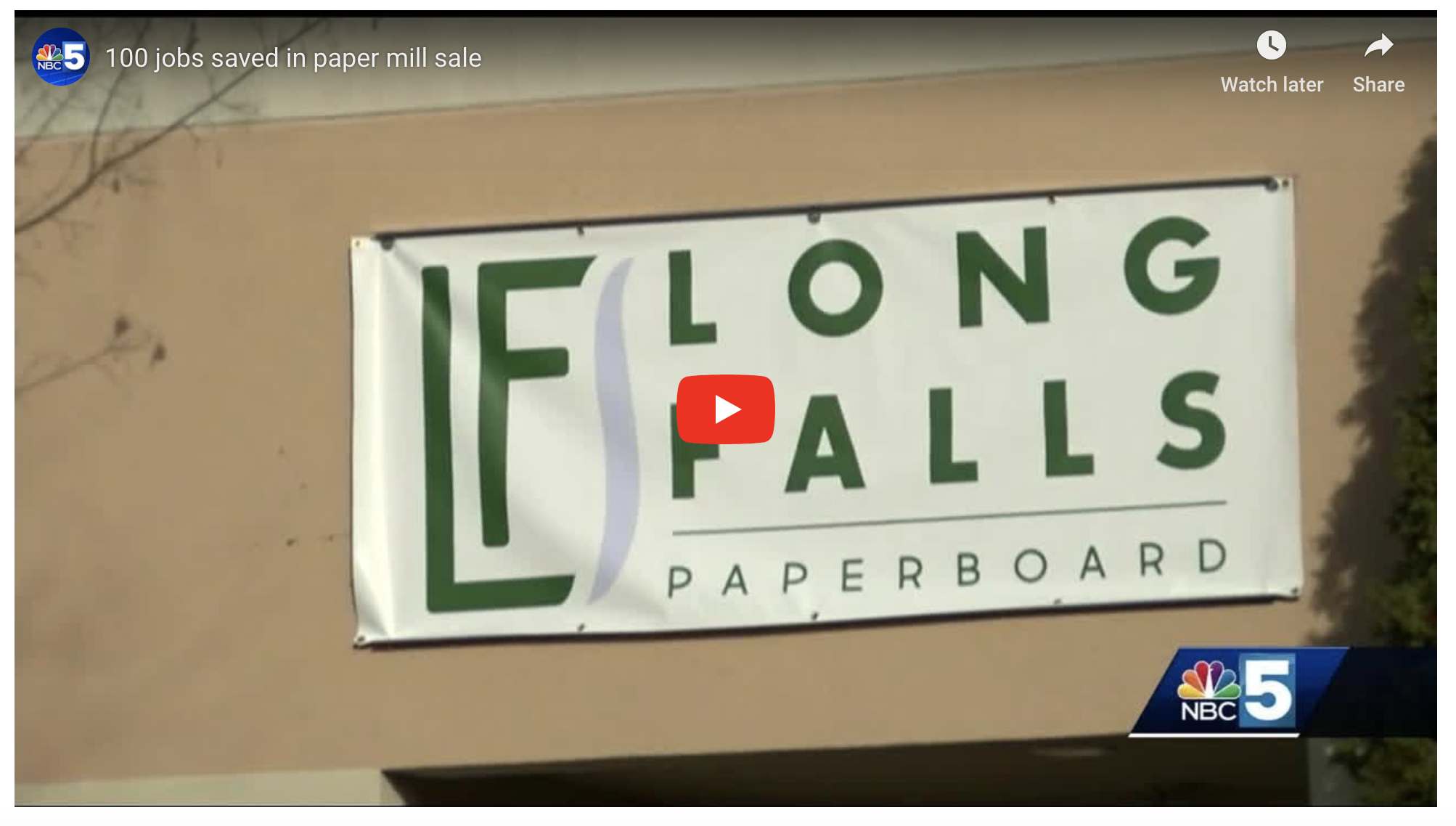 For complete video and transcript of from NBC5 Coverage of Governor Scott’s visit to Long Falls Paperpoard to celebrate new ownership on January 17th, 2019, visit https://www.mynbc5.com/article/100-jobs-saved-in-paper-mill-sale/25941065

The jobs of 100 paper mill employees in Brattleboro have been saved, thanks to a quickly executed acquisition.

The plant is now under the ownership of Long Falls Paperboard.

Just three months ago, the fate of the mill’s future was unclear after its previous owners alerted employees that they would be forced to close the facility if a buyer was not found by the end of 2018.

“When they announced the closing in October, it was a hard hit,” said Steven Zehr, who has been with the mill for 22 years and currently works as a purchasing manager.

Despite the concerns and uncertainty, a potential buyer was quickly found, and multiple organizations worked to close the sale before the end of the year to avoid layoffs or missed paychecks.

“In 62 days, we got all of the permitting done, all of the documents and everything signed on the bottom line,” said one of Long Falls’ partners, Phil Farmer.

The Brattleboro Development Credit Corporation provided financing for the purchase and helped organize other state and local institutions to quickly complete the permitting processes.

“We’d take two steps forward, one step back, three forward, two back, but in the end, we were able to make it happen,” BDCC Executive Director Adam Grinold said.

Grinold emphasized the importance of the 100 jobs supplied by the mill in the Brattleboro area, as the town is still recovering from the loss of roughly 600 jobs following the closure of the Vermont Yankee nuclear power plant.

“I’m excited for the mill and for what this means for our area,” said Hope Therrien, an employee who had left her job at the mill several years ago but is now returning as a customer service representative.

Therrien said the work of the new owners has made her quite optimistic for the mill’s future and its place as an important employer in the Brattleboro area.

While addressing employees and new ownership at the mill on Thursday, Republican Gov. Phil Scott said the combined work of the employees, Long Falls and a multitude of local and state organizations epitomized the “Vermont way of neighbors helping neighbors.”

Local Students Ready for Their Close-Up

Above, Kylie Reed and Sadie Boyd, seniors at Twin Valley High School, talk about their…

BDCC acknowledges, respects and celebrates differences and commonalities of all people. We are committed to ensuring…