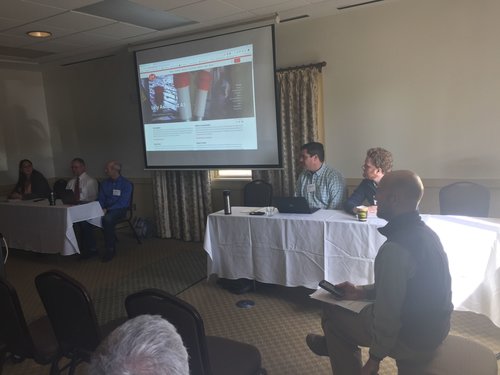 At the 3rd Annual Southern Vermont Economic Development Summit, I hosted a panel exploring the value of tech within the rural economy and the many ways that it is impacting our communities. I’m compelled to share this experience with a wider audience.

As an individual straddling tech generations, I was surprised to be invited to facilitate Wired, a panel focused on the integration of tech within rural communities. I didn’t even own a computer or mobile phone until my 20’s—yet here I am, proficient with Google Suite, Slack, Asana, and much more—and, comfortably matching stride with the tech-savvy millennials I work with.

Our core business at Food Connects focuses on the aggregation and distribution of regionally produced food; sourcing from over 65 vendors and selling to over 125 wholesale customers. We utilize an e-commerce site to facilitate all transactions. In fact, one could say our e-commerce site is the backbone of our operations; allowing us to manage inventory, receive orders, generate picking reports, develop delivery routes, send out invoices, and receive payments. To be competitive, we have learned to leverage new tech platforms to best serve our customers and producer partners.

We work with many producers who are leveraging new technologies to capitalize on market opportunities. Most, if not all, can update inventory, make sales calls, and market their products via social media from the field on their pocket computers—AKA cell phones. Technology allows small rural businesses to act bigger and do more. It’s quite ironic that in order for rural businesses in small communities to thrive, we must utilize Silicon Valley-esque technology that may not fit with the idyllic vision of a rural, agricultural community. But, in order to keep it rural, we need tech.

Robotic Milker and the story of Echo Farm Pudding

Echo Farm Pudding co-owner, Beth Hodge, consistently struggled with the perpetual workforce challenge of finding, and keeping, good help. In 2016 “We decided to take a risk and invest in the future of the farm with a robotic milker,” Hodge shares. The second farm in New Hampshire to utilize this new technology, Hodge says it has been a revolutionary change to their business, both for the cows and the farmers. The robotic milker runs 24 hours a day, 7 days a week, allowing the cows to choose when they want to be milked, rather than the typical morning and evening milking schedule. Additionally, the robotic milker collects data on the animals, keeping Beth informed while allowing her to focus on other tasks such as pudding production, sales, and marketing. Hodge explains “The lifestyle change is amazing. It took me a while to trust the robot and data analysis, but over time I have learned to trust it after repeatedly confirming alerts by seeing the cows in person and addressing their needs.”

Chris Callahan, Agricultural Engineer for University of Vermont (UVM) Extension, applies engineering to food systems. Callahan helps food producers, processors, and distributors integrate new technologies to improve the efficiency, quality, safety, and cost of their systems. He spoke of the importance of connectivity and knowledge sharing among market users, as well as the impact of automation on the harvest and post-harvest processes.

“Technology can level the playing field for smaller farmers, providing them with a competitive advantage,” says Callahan. “Rural economies need to produce value through differentiated quality, which is achieved by combining research, knowledge, and craft. That IS technology.” Callahan ended with his concerns about the next generation of technical innovators in this state, “We need to be fostering the organic development of a tech-savvy workforce within Vermont.”

Remote employment and the intrinsic value of working remotely in Vermont

We’ve all heard of the Remote Worker Grant Program (RWGP), introduced in 2018–

but have you ever met one of these mythical humans? Teddy Martin moved to Vermont this past winter and tapped into the RWGP to help pay for his move. “My wife and I had both been living in New York City for a while and knew we had to get out. Vermont offers the quality of life that we wanted,” says Martin. “Ironically, a remote tech job allows me to live a more grounded and fulfilling life here in Brattleboro than we had in NYC.” He works for Plex, a company with a small office in Silicon Valley, and a staff of remote workers all over the world. Remote employment is a growing sector, allowing companies to recruit talented people and allowing them to live wherever they wish. When asked how Vermont could better accommodate remote workers, Martin says better internet access and co-working spaces would make it easier to build a community around remote work.

Dr. Randy Anselmo recently founded Bewell.md with the goal of using telemedicine to alleviate the rural healthcare challenges faced by colleges, boarding schools, and camps. “If you combine Southern VT College, Bennington College, Marlboro College, Vermont Technical College, and Green Mountain College, you get the combined total of about 3600 students,” says Anselmo, “An average family doctor has about the same number of patients, but how do you get all those students to one location for one doctor visit? You can’t.” Telemedicine is emerging as a global solution and Dr. Anselmo is bringing it to Vermont. According to Anselmo, research shows that one can solve 90 percent of patients’ concerns with basic telemedicine consisting of a secure video connection, an electronic health record, and a remote device to collect and track physical examination data. In a pilot project this past year with Green Mountain College, Dr. Anselmo touts a 100 percent success rate.

Similar to Hodge’s robot milker, this practical solution may take some getting used to. “When I went to the colleges and told them I could serve all their students with almost no cost to the college, they said, ‘What’s the catch?’ It’s up to us to prove that there is none.”

Dimitri Garder is no stranger to rural tech. Based in Bennington, VT, he has worked as a tech entrepreneur for 30 years. His business Global-Z International cultivates customer experiences through the application of customer data. He also founded The Lightning Jar, an entrepreneurial and coworking center in Bennington, similar to what Teddy was asking for. According to Garder, technology can be much more disruptive and significant in rural economies than in cities. He uses autonomous vehicles as an example, explaining that while cities have invested in public transportation, rural areas are set to benefit more from autonomous vehicles due to their lack of transportation infrastructure. It’s important to note, says Garder, “that technological innovations can solve for access, but not necessarily affordability. As with all tech issues, public policy needs to solve for affordability.”

When asked about challenges with running, and funding, The Lightning Jar, Garder shares that the lack of population and the ebb and flow of demand impacts the center. In general, Garder says the “lack of population increases the costs of the centralized industrial model of delivering basic human needs.” He stresses the importance of human connectivity in a world that is more connected than ever and hopes that community spaces, like The Lightning Jar, can provide that forum while supporting a vibrant downtown that is focused on the human experience rather than retail.

The theme of connectivity was raised time and again throughout our conversation, and really struck me on multiple levels. To start with, tech enables valuable connections through peer-to-peer learning, social media, and other applications, as well as enabling remote access. On the flip side is the lack of connectivity on the human level as more work is done virtually. It’s clear that we need to maintain community spaces to remain connected with our neighbors, especially in sparsely populated rural areas. Finally, the ability to stay connected relies upon access to cell service and high-speed internet; which presents a major bottleneck in Southern Vermont’s ability to leverage this rural tech opportunity. As many of us know, it’s challenging to run a business when you run the risk of dropping important phone calls with co-workers or customers while driving through town.

Panelists and participants lamented the lack of time to dig deeper into the multiple stories and themes identified. This write-up is one way to keep the conversation going, and we invite you to remain open to opportunities presented through new tech and to proactively engage with one another around how technological innovation will continue to transform our lives; whether we like it or not. Instead of letting the changes control us, we have the opportunity to lean into the uncomfortable and direct the change towards the betterment of our rural economies.

OP ED: Economic Development is About People and Communities

Save the Date: Southern Vermont Economic Development Summit, May 30th

After a successful inaugural Southern Vermont Economic Development Summit with over 130 attendees, the Brattleboro…