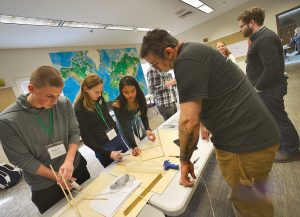 Originally printed in the Brattleboro Reformer under the headline ‘Faith in experimentation’ learned at SIT event’, Photos by Kris Radder.

BRATTLEBORO — Exploration was highly encouraged Wednesday at the third annual Sophomore Summit, where high school students got a glimpse of job opportunities in the community.

“First of all, today is about extracting ideas; it is not about finding a career,” said Paul Gambil, executive director of the Community Engagement Lab, which helps bring teaching artists and creative projects into classrooms. “And also, sophomores, you need to have this total, uncompromising faith in experimentation. It is not about knowing what you’re supposed to be doing as a sophomore. It is about willingness to experiment.”

The idea, the BDCC said, “is to help young people plan for local, high growth, high need, high wage and high opportunity jobs. VSAC recently reported that only 30 percent of Vermont students graduate with a two or four year degree within six years of enrolling.”

The BDCC called exploration “an important part of educational planning, especially as it relates to aspirations and personal growth.” BDCC Workforce and Education Specialist Alex Beck said his job is about making sure students know the opportunities in their “own backyards.”

L&G student Tyler Trotter said he would be going to a workshop called “No Shame in Gaming” and on a tour of C&S Wholesale Grocers. Buses for off-site visits also stopped at Shear Designs Hair Studio, the Brattleboro Police Department and Fulflex Inc.

When Gambil asked why students came, answers ranged from “to learn more about what we want” to “they made us go.” Trotter considered it a field trip. 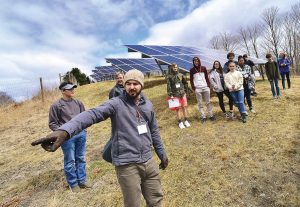 What did the students love about being sophomores?

“Flying under the radar.”

“We don’t have to take SBACs,” or Smarter Balanced Assessment Consortium tests.

John Pennington, an app developer, said learning to be comfortable with failure would help students succeed.

“I like exploring new ideas, new territory,” he added. “I love learning as much as possible.”

Dan Ridlehoover, manager of Leonard Farm in Dummerston, told students he enjoys making his own schedule and picking his priorities.

“We really are born to be who we are,” said Melissa Mroz-Gaskill, director of The Little Red House Early Learning Program in West Brattleboro.

She has been in the field of early childhood learning for more than 30 years.

“It’s a passion,” she told students rolling Play-Doh around on desks. “Patience is important. Respect and tolerance are skills you need.”

Mroz-Gaskill said she enjoys being able to be creative on the job.

“That’s what I love about teaching young children,” she said. “They are always up for an adventure.”

But Mroz-Gaskill admitted the work takes a lot of energy.

Loud noises could be heard in a classroom next door. Sophomores were busy using small pieces of wood and glue guns to build towers. Guidance came from an architect, a builder, an engineer and a project manager.

Other workshops delved into marketing, human services, cooking, manufacturing, legal aid and entertainment. The event was sponsored and funded by C&S, the McClure Foundation, Vermont Department of Economic Development and Youth Services. 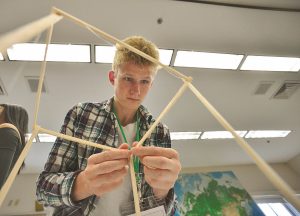 For more information, visit the BDCC website page under the Workforce Center of Excellence.

Wheel Pad of Wilmington, Vermont has become an approved builder in the Veterans Home Loan…