The BDCC is committed to helping businesses grow by helping you find the best facility possible. The BDCC helps businesses and entrepreneurs with the physical expansion resources required for growth in three main ways:

The BDCC can help your business by helping open a new facility whether it’s building from the ground up, or adding to an existing building. We have helped companies such as Chroma and GS Precision with adding new facility space and securing the financing necessary to implement their expansions projects.

On the right is an image of Chroma’s new facility, which the BDCC helped facilitate and finance, guiding the company through the building process. 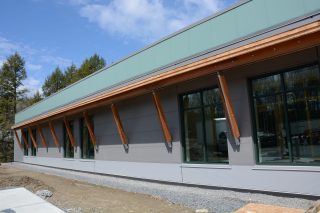 Businesses looking to locate or relocate in the region often need help finding an appropriate facility or site. The BDCC can help with this process as well, as we did recently with Mocha Joe’s.

Pictured at right is Mocha Joe’s co-owner Pierre Capy in the recently purchased facility in downtown Brattleboro which is enabling Mocha Joe’s to consolidate their processing and warehousing operations that have not been colocated with their headquarters until now. BDCC aided in the process of this purchase of an existing facility based on understanding the client needs, and opportunities in the commercial real estate market. 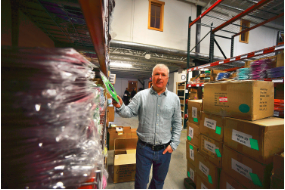 3. Tenant Space: From Startup to Fit-up

The BDCC owns and operates over 500,000 sf of commercial and industrial space with 85 tenants and over 400 employees. We can provide new businesses with space in one of our Brattleboro sites. We also work with our tenants who need to adapt or expand space in order to grow their businesses.

Pictured on the right is True North Granola, one of the BDCC tenants who have grown their business in the Cotton Mill building. 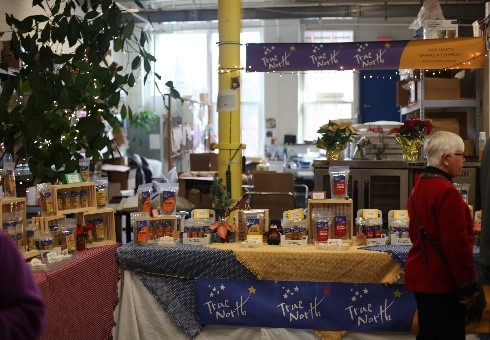 To inquire about commercial or industrial space to rent, please contact James Walker at jwalker@brattleborodevelopment.com or visit our Tenant Portal.

Long Falls Paperboard: In late October, 2018, Neenah Paper announced they would be closing their Brattleboro paper mill, a process that would result in the loss of 100 good-paying jobs in the region. The BDCC responded rapidly, initially by attempting to assist Neenah Paper’s operations and remain open. The company declined, only offering the alternative of a sale that could be successfully executed by December 31. The BDCC helped find this buyer in Long Falls Paperboard (LFP), and brought together all the parties necessary to complete such a sale in less than 60 days. This was possible through the establishment of a public-private partnership between the BDCC and LFP, allowing the BDCC to quickly purchase the paper mill and perform necessary environmental assessment and cleanup before selling the property to LFP. A US Environmental Protection Agency (EPA) Brownfields grant of $500,000 was secured by the BDCC in June, 2019 to complete this process. For more information about the Long Falls Paperboard plant, see the articles below.

G.S. Precision: In 2017 G.S. Precision, a high-precision manufacturer of machine components, officially completed a $17 million expansion that had the effect of retaining 300 local jobs and bringing an additional 100 manufacturing jobs to the region. The project was a result of the cumulative efforts of many organizations and programs, with the BDCC and Vermont Agency of Commerce and Community Development (ACCD) leading the way. The BDCC was instrumental in creating a package of financing and incentives to help fund the $17 million project, which included  TD Bank and VEDA (Vermont Economic Development Authority) financing, a Community Development Block Grant, New Market Tax Credits, Windham County Economic Development Funding, and Vermont Employment Growth Incentives. For more information on the G.S. Precision expansion, see the articles below or visit the G.S. Precision project page linked above.

Chroma: Chroma is a local optical filter engineer and manufacturer that supplies lenses to industries across the world. In 2017, the company began a 40,000 square foot expansion costing roughly $20 million which is helping to retain the company’s 113 existing jobs as well as adding 26 new jobs to the region. Chroma is an employee owned (ESOP) business. This project was facilitated by the BDCC, the Vermont Agency of Commerce and Community Development, and the Town of Rockingham; the BDCC stepped in as a consultant for the project, facilitating local and state funding sources including the town of Rockingham, the Community Development Block Grant program, loans from the Vermont Economic Development Authority, the Windham County Economic Development Program, Vermont Employment Growth Incentives, and federal New Market Tax Credits. For more information on the Chroma expansion, see the articles below of visit the Chroma project page linked above.

Brooks House: Since 1871, The Brooks House has been a pillar of downtown Brattleboro, serving as both a venue for retail space on Main Street (on its first floor) as well as apartments and residential housing on the upper three stories. However, after a devastating fire in 2011 which rendered the building uninhabitable, significant investment was needed to secure the future of the property and restore that critical section of Brattleboro’s main downtown block. To help with the renovation, the BDCC assisted in securing private financing from a variety of banks as well as public financing in the form of New Market Tax Credits, a Community Development Block grant, Vermont Downtown Tax Credits, Vermont Economic Development Authority Loans, and Federal Rehabilitation Investment Tax Credits. For more information on the Brooks House project, please see the articles below or the Brooks House project page linked above.

Commonwealth Dairy: In December 2016, yogurt manufacturer Commonwealth Dairy announced their intentions to go through with a $20 million dollar expansion of their facility that would bring over 50 new jobs to the region. Commonwealth began in Brattleboro less than ten years ago and grew quickly to over 100 employees. This new expansion represents remarkable growth for the company, and follows a previous 23,000 square foot expansion that added 34 jobs to the existing 110 person workforce. While Commonwealth considered expanding their Arizona facility, the company ultimately partnered with the BDCC to grow in Brattleboro instead, securing public financing from the Vermont Training Program, Vermont Employment Growth Incentives, a grant and tax stabilization from the town of Brattleboro, and a million dollars in funding from the BDCC-run Windham County Economic Development Program (WCEDP). For more information on the Commonwealth Dairy project, please see the press articles below or the project page linked above.

Mocha Joe’s: Locally owned and operated Mocha Joe’s, known for its iconic downtown Café, is also a roasting company with over 100 wholesale customers throughout the Northeast, and a staff of 7. In April of 2018, Mocha Joe’s purchased the abandoned Cultural Intrigue warehouse in downtown Brattleboro for $1 million in order to expand their facilities. The BDCC helped to facilitate matching the available site with Mocha Joe’s desire to relocalize more of their company’s activities, and a $350,000 Windham County Economic Development Program loan. For more information on Mocha Joe’s Brattleboro expansion please see the content below.

Biomass could replace natural gas at Brattleboro paper board factory

From VTDigger By Anne Wallace Allen Sep 5 2019 Long Falls Paperboard, the company that this year bought the former Neenah Paper Inc. plant in Brattleboro, is using a $1 million federal grant to study using wood biomass instead of the natural gas that is delivered…

BDCC Helps Secure funding for Long Awaited Upgrades   August 13, 2019            BRATTLEBORO, VT – The federal government has awarded $440,000 to the Town of Brattleboro for critical water and wastewater infrastructure improvements needed to support commercial development. On July 29th the U.S. Department of…

Cleanup of Industrial Site in Brattleboro Part of Deal to Save 100 Jobs BRATTLEBORO, VT – Brattleboro Development Credit Corporation (BDCC) has successfully secured a US Environmental Protection Agency (EPA) Brownfields grant. Funds will be used for a 39-acre site that has been in active use…

The Brattleboro Development Credit Corporation (BDCC) & Southeastern Vermont Economic Development Strategies (SeVEDS) Boards of Trustees, Members, and Staff hosted this year’s annual meeting at the Brattleboro Music Center. The theme of the evening was “Investing in Our Region,” celebrating the public and private investments…

Sugar Mountain Holdings purchased the Maple Valley Ski Area in Dummerston in late May. The new owners, who have deep ties to the region, worked with the Brattleboro Development Credit Corporation and local service providers to create a new plan for the former ski area.…

From the Vermont Business Magazine, Monday, May 7, 2018 More than $1.2 million in funding commitments are in place and remediation design work is currently under way at the former site of the abandoned and blighted Robertson Paper Mill in Bellows Falls.  This high-profile Brownfields…

BRATTLEBORO — On April 3rd the owners of Mocha Joe's bought the former Cultural Intrigue Warehouse for $1 million at auction to expand their coffee roasting and increase storage capacity. The new facility will save storage fees and bring inventory closer to home. The plans include…

Back in December 2016, Chroma, a local optical lens manufacturer that distributes its product all over the world, was approved by the state of Vermont for a 37,000 square foot expansion to its facilities. This project would add about 25 new jobs as well as…

read more
BDCC is a private, nonprofit economic development organization dedicated to creating and retaining a flourishing business community that supports vibrant fiscal activity and improves the quality of life of all its residents
Join our Mailing List
Copyright BDCC - All Rights Reserved. The work of Brattleboro Development Credit Corporation is made possible in part by a grant from the State of Vermont through the Agency of Commerce and Community Development.